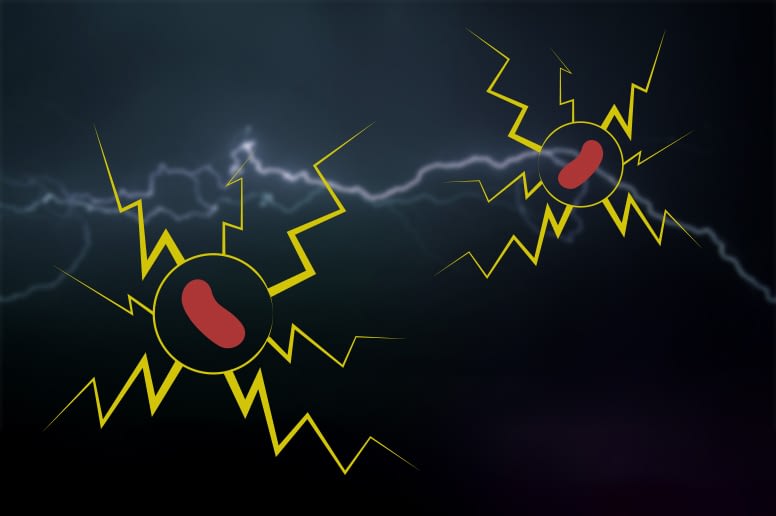 Pop culture has introduced us to many superhumans with the ability to harness electricity. For instance, the nordic god, Thor, channels electricity in the form of lightning using his mythical hammer Mjölnir. Like Thor, we have also learned to harness the electrical energy in our own way via the use of cables, batteries, and the likes. Recently, scientists have found that there are others on Earth who share this ability; the microorganisms. Microorganisms have, in fact, developed natural and organic apparatuses to channel electron flow across conductive surfaces outside of their cellular boundaries.

Microbes with the ability to carry out extracellular electron transfer are regarded as being “electroactive” and the branch of science studying them is called electromicrobiology.

An organic circuit board

Microbial extracellular electron transfer can be broadly grouped into two modes. In the first mode, the conductive proteins can act as an electron shuttle which carries the electrons, travels outside the cell, discharges the electrons to a conductive surface, and travels back into the cell to “shuttle” more electrons. In the second mode, the conductive proteins can associate with cellular structures like pilli or membrane extensions that discharge electrons to the extracellular conductive material via direct surface contact; like an organic electrical cable1! While these are the currently known modes,the discovery of more and more electroactive microbes means that we might soon see new and unknown microbial electroactive pathways.

The perks of being an electroactive microbe

Like humans, some microbes need to eat food and respire (or breathe) oxygen to live to grow. Instead of oxygen and unlike humans, some microbes can also respire other chemical compounds like nitrate and sulfate to carry out their metabolic processes. In essence, respiration is a series of chemical reactions involving electron flow from one compound to another resulting in energy generation. Electrons cannot exist alone in solution and respiration cannot proceed if the cell cannot find a compounds to pass the electrons onto. Most compounds used for microbial respiration are water-soluble and are able to diffuse and cross the cell membranes and the respiratory processes are contained inside the cell.

But, under certain conditions, like where there are no such soluble compounds available, electroactive microbes are able to use insoluble and solid conductive substances instead to transfer the electrons onto. This way, they can continue to respire, gain energy and grow!

The implications of microbial electroactivity

Despite their small size, the ubiquity and abundance of microbes makes them integral to the functioning of the Earth. Equally abundant are naturally occurring conductive minerals, from iron oxides in soils and sediments to hydrothermal vents in the deep oceans. As such, it is very likely that these microbe-mineral interactions (involving extracellular electron transfer) could be occurring in the soils right below our feet and in our oceans at this very moment affecting the earth’s biogeochemical cycles.

In addition, electroactivity has been demonstrated in many different kinds of microbes from both the bacterial and archaeal branches of life. Scientists have even found some of our gut microbes to be electroactive – imagine a microbial electrical network happening right in your belly!

Examples of representative environments where electroactive microorganisms have been found

Thirty years ago, it would have just been science fiction to consider extracellular electron-transferring microbes. Today, scientists have developed devices that convert water vapour to electricity based on microbial conductive proteins5. Although Electromicrobiology is a relatively new field of science, it is growing fast due tothe interdisciplinary nature of the field, environmental impact, and vast applications in technology. Indeed, the next time we’re in need of an electrical superhero, we need not look to comics but just remember that they are already everywhere around us, you just need to look through a microscope!